Ask Every Police Chief: Do you condone racism?

> Chris Crass > Ask Every Police Chief: Do you condone racism? 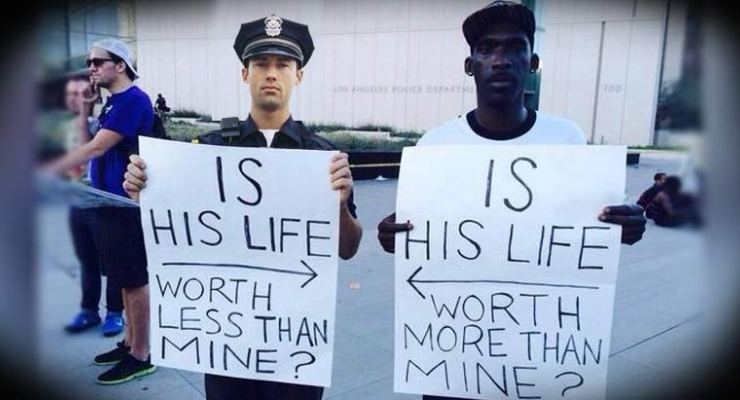 Rather then the standard in media of asking Black people about their forgiveness of the police who killed their babies, or asking if they are anti-police, and the standard of nearly every Black person in the country needing to hold a press conference expressing that they aren’t calling for violence against police, but rather equal protection under the law and an end to racism:

I think it’s time that every police chief, every police union, every Mayor, every Governor, every head of the Chamber of Commerce, every head of a local, regional, federal government agency should be asked: “Do you condone anti-Black racism? Do you feel remorse for the repeated racist violence experienced in the Black community at the hands of law enforcement? How do you explain the consistent racially unjust disparities in both law enforcement and every other indicator of equity in our society and government?”

To be asked “What would you say to the Mother and Father of Tamir Rice, Sandra Bland, and the thousands of other parents whose children have been stolen from this world due to the refusal of law enforcement to be accountable for ending racist violence in their departments.”

To be asked, “Given that police fatalities are at a historic low during the Obama administration and fatalities of Americans of color are at historic highs, do you think the Blues Lives Matter message is really intended to position demands for civil rights and human rights for Black people as being anti-police? Furthermore, given that Black Lives Matter leaders consistently denounce police killings and express public sympathy with their families; that white people shot police officers at far higher rates and are responsible for the majority of fatalities; and the killing of police is universally condemned; and the shooters are punished under the law, while law enforcement leaders routinely slander the character of those murdered by racist police violence and provide justification for nothing to change; and the shooters routinely escaping any penalty let alone punishment for their crimes, it gives the impression that the function of the police and even the rule of current law, are in fact, fundamentally opposed to civil and human rights for Black people.”

“Given this, isn’t the Blues Lives Matter response to Black Lives Matter just a terrifying way of affirming that, indeed, from law enforcements’ perspective, and the perspective of most politicians and business leaders, the problem isn’t racist violence or inequity; the problem is, Black people are forgetting their place?”

To be asked, “Given the pattern of racist violence endemic in the criminal justice system, do you support the growing voices for change led by the Black Lives Matter movement, and if you don’t support that movement, can you explain how you believe change can happen in an entrenched social order evolved during the slave society that continues to create the racist outcomes it was designed to enforce?”