Life in the Second Gilded Age

Life in the Second Gilded Age 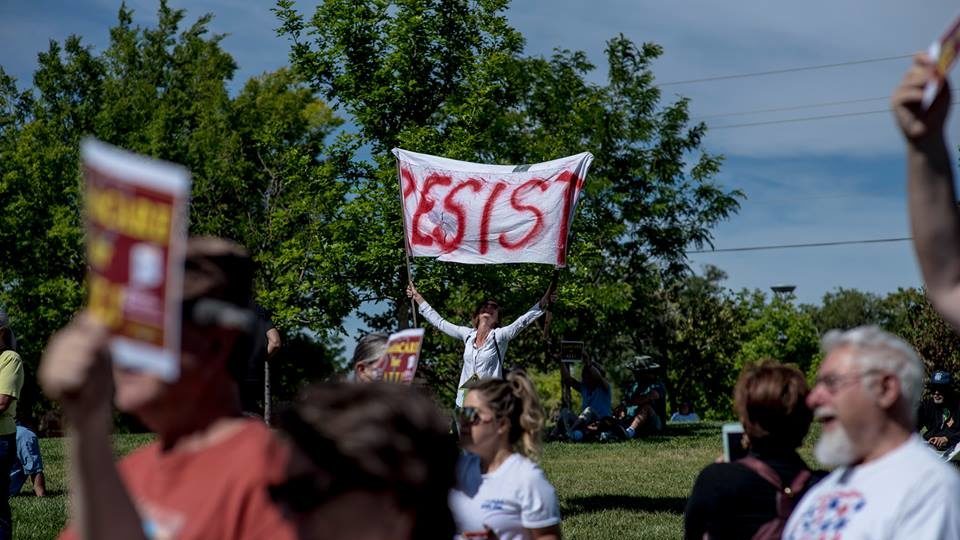 One year after the Resistance began, I think we’re doing ok. A year ago we discussed broad strategy–to build the mass movement on issues such as racism, poverty, war, and environmental destruction, and to work toward power, meaning turning the Democratic Party to becoming a party of the people. We’ve taken a year’s worth of initial steps, and we’ve even had a few successes.

It’s going to be a 20-40 year struggle to replace the current neo-fascists and to undo the damage they’ve done in the last year. But we are the majority. All we have to do is get ourselves organized–both the mass movement and the structured movement for power.

The far-right is our model. They’ve been organizing continually since 1964, when Goldwater was defeated soundly. They were able to take hair-brained articles of religious faith, like trusting the market to solve all problems, while shrinking government, and build a mass base among Christian fundamentalists to take power (Reagan, GW Bush). They created a cultural hegemony that made the slogan Government is Bad common sense. Without a better idea, Democrats became the slightly more moderate neo-liberal party, also working for corporations and finance, as thoroughly controlled by capital as the rival Republican Party. Since its high point of 1970, organized labor has diminished in size and power, and there was no counterweight to capital, which won both coming and going.

That’s how we got in the Second Gilded Age, just like the first, imbalances.

A half of our country is suffering. But those of us who still have our wits about us have been organizing, and the possibilities are great. We just need time and help.

Statewide, here in New Mexico,  around 25,000 people turned out for the Jan. 21 Women’s March against Trump. That energy has been carrying over to organizing.

The anti-fracking movement in Sandoval County and statewide won a big victory this month by forcing the County Commission to reverse a previous decision to let the oil and gas companies do anything they pleased, as long as it wasn’t near Rio Rancho. Statewide the Chaco Coalition is doing well.

The movement for a renewable energy economy is doing well, with major victories over PNM by New Energy Economy out of Santa Fe and also a coalition on energy led by various groups such as the Sierra Club, Wild Earth Guardians, and Conservation Voters NM. 350.org needs some youth energy and revitalization, though, as the struggle against global climate change should actually be the center of our work. (See Naomi Klein’s “This Changes Everything: Capitalism vs. the Climate.”

The movement to defend immigrants, essentially an anti-racist movement, has had a number of successful organizing events, such as the 2,000 people who attended

A rare opportunity came out to NM from North Carolina when Rev. William J. Barber held a mass meeting in August at a church in Albuquerque announcing the National Moral Revival: Poor Peoples Campaign and 1200 people attended, with 400 signing pledges to engage in direct action nonviolent civil disobedience at the Roundhouse in May and June. The goal is 1000 people in each of now 32 states all protesting various local variants of four issue areas, known as Fusion issues because they’re all interconnected: racism, poverty, environmental destruction, and war and the effects of militarism. As with the Moral Monday movement in North Carolina, this nation-wide Poor Peoples Campaign, commemorating Martin Luther King’s post-humous Poor People’s March on Washington 50 years ago.

A Steering Committee to launch and coordinate the next six months’ campaign in New Mexico is getting started. The goal is to create a united mass movement on these issues by June. After that, who knows? How about a school for organizing, say a NM version of the Highlander Folk School?

The NM Progressive Coalition, while still not yet a coalition of mass membership groups, the only one being Progressive Democrats of America, is still puttering along, laying the basis for a future progressive alliance. Our goal has always been to build the progressive movement. We are working on a big People’s Rally Feb 5 at the Roundhouse, echoing the one last year at which 1000 people attended; developing a draft progressive platform (still in process), lobbying at the legislature; forming a People’s Electoral Alliance to pool our movement’s knowledge of candidates in order to assess them; another small project, transforming the Democratic Party into a party of the people, through our work with two progressive caucuses within the party (more on this below); and a leadership training team that has been offering groups help at figuring out story, strategy, and structure, ie., building leadership for the movement. Again, we sure could use help.

At the other side of the strategy lies the structured movement for power, ie., the movement to transform the Democratic Party to become the party of the people. Approximately 350 new people came forward last February to volunteer to become ward and precinct captains for the previously moribund Democratic Party. A good number of groups, such as the Nasty Women and the Equalists, and an incipient progressive caucus of ward and precinct captains are all working to figure out how to build a progressive voter base at for the Party. Another committee is working at the state party level to create a formal progressive caucus in the party to push progressive platforms and ideas, to democratize the party rules, and to elect progressives to party offices and positions.

Tim Keller’s landslide election as Mayor of Albuquerque was the result of the mobilization of hundreds of volunteers, raising almost three quarters of a million dollars, and building electoral organization to get out the votes. Now the job is to create good government for Albuquerque and to show that progressives can make life better for all, especially the people at the bottom. It’s going to be a tough four years, but I’m hopeful. Tim’s not only a very effective candidate and campaigner, he’s a brilliant manager and office holder. We’ve all got to help.

Tim was the only viable progressive in the race. (Don’t get me started on poor Gus Pedrotti). That’s not the case in Santa Fe where four people who claim to be progressive are running against a single Democrat in Name Only (DINO). The Dino may be elected unless there’s a landslide for Alan Webber, the front runner among the progressives. How do progressives sort these things out? Shouldn’t there be a council of elders or something to say who should run and who shouldn’t? Or does this smack too much of bossism? Maybe a better way is to establish definitions of progressive, as we’re attempting to do with the People’s Electoral Alliance (above).

There’s so much work to do it’s incredible. In general we’re all learning about goals, strategy, structure, and leadership. As I mentioned at the start of this rant, it’ll take years to win, so we’d best not waste any more time.

If you’d like to help–old retired people who have time, young people with kids who are concerned about the future, and anyone in between–please drop me a line at mark@markrudd.com.  I’ll try to help you find a place in this growing movement for power.

2018 should be a pretty good year if we keep organizing at this local level, build our numbers, our structures, our leadership, our power.