No Time to Let Up 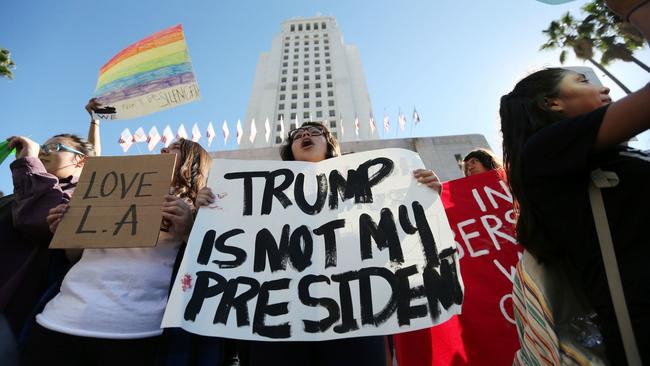 The contrasts are almost so astonishing as to be trite. On one side are the millions of people protesting Trump in hundreds of cities and towns across the US in the greatest popular opposition to an incoming president in US history. On the other side is a new administration that seems to have already conceded that it neither has nor really seeks popular legitimacy.

Trump shows no desire to build a popular base, nor win over any citizen who was not already a supporter. In his inaugural address he spoke repeatedly of giving power back to the people, but this people is narrowly conceived. Trump is there to act on its behalf, to redress its grievances and defend it against foes (foreign competitors, corrupt politicians, street gangs). This authoritarian vision promised a glorious future through the enactment of a national will that his administration defines, and one that will require “total allegiance”.

Day One also saw the new administration’s takeover of  Whitehouse.gov.The purpose of this official website is always to present the president’s priorities. Here though it seems to serve notice of a stripped down ideological plan for accelerated resource extraction, deregulation, global military dominance, and domestic repression.

The inaugural address articulated Trump’s vision by painting an almost cartoonish landscape of defeat, humiliation, and violent unraveling of the social order. It is unsurprising that the speech was penned by chief White House strategist Steve Bannon and senior aide Stephen Miller, who likely wrote the copy for the White House website as well.

The speech is consistent with the vision Bannon has often described in his worldview – a grand historical struggle “of the Judeo-Christian West against Islam” or the “barbaric empire in the Far East”; and the political necessity of nationalist fervor. Miller, who has been obsessed with what he sees as the evils of multiculturalism since his days at Duke University (with his friend Richard Spencer), no doubt sees “American carnage” as what many people with whom he closely associates call “white genocide.”

The pages of Whitehouse.gov meanwhile take the Nixonian idea of the Silent Majority – which the Trump campaigned used throughout his campaign – and make it a full-throated declaration of a law and order state: “Our job is not to make life more comfortable for the rioter, the looter, or the violent disrupter.” It is as if the administration knows full well that it will face ever-increasing resistance as it pursues fully vanguardist aims, and so must preemptively define that resistance as criminal.

The entire orientation of this new administration can be summed up in the declaration Stephen Miller would scream to campaign crowds as he warmed them up for his candidate: “Everything that is wrong with this country today, the people who are opposed to Donald Trump are responsible for!”

These folks are preparing themselves for our resistance. Indeed, Trump’s first day on the job was spent beginning to mend fences with the intelligence agencies he will need to enact domestic repression.

We have popular power overwhelmingly on our side, but we must not let up.