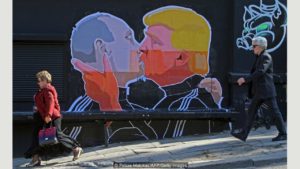 I know it’s the fifth anniversary of Occupy Wall Street, but there is little to celebrate at such a grim moment. That being the likelihood Trump may very well win.
If he does, Black Lives Matter will be declared a domestic terrorist outfit, just like the Earth Liberation Front was under Bush.
Trump and Attorney General Giuliani would relish using the National Guard to crush blockades of oil pipelines and trains, and indigenous people defending their lands. There will be no more climate justice movement or even hesitant steps toward limiting climate change.An English-only law would likely be passed, DACA be withdrawn, and sanctuary cities outlawed. White supremacists, Neo-Nazis, the Klan, and the Alt-Right would all be welcome into his administration, overtly or covertly.

Significant gains made at the National Labor Relations Board in the last few years will be overturned.

Huge swaths of the West under federal control will be turned over to logging, ranching, mining, and oil and gas industries.

Tens of millions would go from inadequate healthcare to no healthcare.

The Alt Right will aggressively disrupt the left.

There will be organized vigilante violence, perhaps even mini-pogroms, against Muslim and Mexican communities with the state turning a blind eye.

Don’t think it can’t happen; the WWI period saw hideous pogroms against African-Americans and Chicanos with state support. Entire communities were wiped out and thousands killed.

This would just be the beginning. Trump makes Reagan’s Voodoo economic policies like a beacon of rational economic planning. His combination of budget-busting tax cuts, decimating social welfare, roiling U.S. alliances, and abrogating free-trade deals would send the economy into a nosedive. As soon as a recession hits, Trump would immediately go hunting for scapegoats to distract his followers. This could include a ban on Muslim immigration, a registration program, and mass round-ups of immigrants, meaning concentration camps to hold them before they were ousted, overseen by his “deportation force” of Brownshirts.

There is a quaint notion on the left that somehow Trump is hot air. This ignores the dynamics he’s set in motion that will make new types of state-sponsored racial violence all but inevitable. This is not just a quantitative change over Obama and Clinton, but a qualitative one. In fact, it may even be worse that what I am outlining here. This is a man who muses about using nuclear weapons, he ignores even basic bourgeois political norms or rules, and he is lustily cheered by tens of millions when he calls for the assassination of his opponents and mass ethnic cleansing.

Yet a significant portion of the left is obsessed with how terrible Hillary Clinton is, both as a candidate and politically. As if this is somehow news. I see very little from the Facebook left on the extreme dangers Trump represents. I’ve gone to six different Trump events, and it’s evident he has consolidated a white nationalist movement that is demanding a 21st century apartheid state. Even if it doesn’t happen right away, Trump will inevitably go down this path as he sabotages the entire economy and U.S. foreign relations.

Meanwhile, there is a bizarre faith on the left that the ruling class will somehow keep him in check, despite the fact he will have control over every branch of government. This is matched by a warped belief that somehow extreme racist violence will create new left-wing mass movements. In reality, all the recent organizing gains will whither as the left is forced to wage losing defensive struggles against violent white nationalists.

No one will be able to stop his dictatorial, white supremacist agenda. Congress won’t stop him. He will have a majority on the Supreme Court, and while sections of the ruling class may be deeply unhappy, they will still be safe and obscenely wealthy and can always escape.

This election is a choice between two movements. Do you want to see movements like Black Lives Matter, Climate Justice, low-wage workers, immigrant rights, and other left social forces continue to grow and develop? Or do you want to see Neo-Nazis, the Klan, the Alt-Right on the offense and backed by a Trump administration?

21 thoughts on “The Left Underestimates the Danger of Trump”