White Supremacy and Trump Cannot Have Our People

> Chris Crass > White Supremacy and Trump Cannot Have Our People 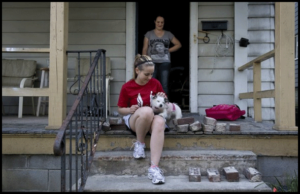 White working class anti-racist leadership is rising all around us and points us towards the work that must be done to unite white communities away from the death culture of racism and into the life-affirming, liberatory mass movement for racial justice and Black Lives Matter that is all around us. And to help us get there, it’s important to take note of the differences between a middle class and a working class orientation to the work of ending racism.

One of the dangers of a middle class-oriented anti-racism is that it replicates some of the ways middle class people are institutionally positioned in society. This isn’t about individual people making mistakes, it’s about a political orientation that evolves out of the lived experiences of people trying to survive in a capitalist society invested in the exploitation of the vast majority of people’s labor, hearts, and souls.

1) a focus on individual achievement, rather then collective/community justice. Often those recently becoming middle class are encouraged and rewarded for looking “down” on their working class and poor communities, families, cultures, and pasts.

+ for anti-racist work, with a middle class orientation, this then often looks like an over-emphasis on changing personal behavior, using correct language, and calling out other people who aren’t acting and speaking in the right way. It can lead to a looking down on the communities that you have come from and distancing yourself from your own past by ruthlessly criticizing everyone who acts and talks like you did two weeks ago.

2) fundamental insecurity based on striving towards a vision of the American Dream that puts you in massive debt, overworking, emotional isolation trying to present as “we’re doing fine, we have it all together”. Insecurity which isn’t just imagined, but rooted in the soul crushing, body breaking realities of how capitalism functions to make the vast majority of us live in regular fear of losing our ability to take care of and provide for our families and loved ones. Capitalism thrives on mass structural, cultural, and social insecurity and it understandably then shows up in our liberation movements. To be middle class is to be just making it, and to properly internalize and project the insecurity.

+ for anti-racist work, this can translate into a wanting everything to look perfect, fear of making mistakes, and external and internal pressure to appear and convince oneself that “we’ve got it all figured out”. This fuses with the individual achievement to again push many of us into an individualistic mode of operating – to work as hard as we can (into burnout), to experience a sense that nothing we do is ever enough, to continually doubt our selves and doubt the possibility of large scale transformative change. To deal with the structural insecurity by tearing down everyone around us, to use cynicism and critique to appear more experienced, effective, and sophisticated then others in the movement.

The enemy is capitalism, not middle class activists. And a middle class orientation isn’t something that only middle class people can have, it’s the orientation that all of us who aren’t ruling class are raised to endlessly and exhaustingly strive for.

1) a focus on structural change and collective/community power and pushes us beyond a focus on unattainable personal perfection and into the long haul person commitment to build grassroots liberatory power. A working class-oriented anti-racism often leads people into seeing the institutional injustices failing their communities, how racism mobilizes working class white communities into active agents of perpetuating everyday acts of racism that serve to enforce and maintain the structural racism that generates wealth and power or the ruling class.

+ for anti-racist work, this translates into a vision of organizing white communities in ways that addresses the real ways they are screwed over in this system and unites the demands and efforts for justice to an understanding of how white supremacy helps maintain a lack of economic security in white working class communities, and how racial justice is central not only to economic justice for all, but freeing the humanity of white people from the death culture of white supremacy. This means seeing the messy, contradictory, complex humanities of white people and looking for opportunities to move white people into justice work, rather then a focus on distancing through easy denouncements. This means become experts at seeing and illuminating opportunities for large number so white people to join in the struggle and be on the right side of history, rather then a focus on personal purity of “perfect politics”.

White working class anti-racist leadership is growing all around us:

With Drew Joy and the Southern Maine Workers’ Center organizing in white working class rural communities for health care and for Black Lives Matter, and being part of national multiracial coalitions that unite white working class leaders with leaders of color to fight for an agenda rooted in racial, economic, gender, social, and environmental justice.

With Meredith Martin Moates and the McElroy House: Organization for Cultural Resources in rural working class Arkansas creating community gatherings to learn about cooperative economics, Transgender liberation, and what it means to stand against racism in these times.

With Jardana Peacock calling white anti-racist healers, spiritual leaders, and activists to share personal practices that help ground them in times likes these and help them take action for racial justice, for Black Lives Matter, and then collecting these practices as a resource for white people to use all over the country.

With Kellie Kelly, a Unitarian Universalist faith leader who is creating cross class conversations in UU congregations on economic justice, how anti-working class attitudes permeate middle class culture, the importance of supporting working class faith leadership, and in all of this, why majority white faith communities need to act for racial justice and Black Lives Matter.

With Rahula Janowski and Catalyst Project, putting forward a vision of a working class-oriented anti-racism, mentoring and developing white working class leaders from around the country, and helping to illuminate how parenting and families are part of liberation movement, rather then a distraction from it.

With Zoe Williams in Colorado engaged in organizing a multiracial working class coalition for improved public transportation, through the working class women’s rights group 9to5, while also bringing their leadership to their local SURJ (Showing Up for Racial Justice) and nationally through anti-racist toolkits for white families.

A working class-orientation isn’t something that all working class people just have, nor is it something that middle class people can’t learn. A critical step is learning from and supporting working class leaders and the work they are doing. Another step is developing class consciousness of our own experiences, taking time to understand our class position (knowing that capitalism does as much as it can to create class confusion), and then making choices about the class orientation of our work.

We are not here to become the perfect white anti-racists, to make changing behavior and language the goal (rather then part of the larger process), to strive for an educated white anti-racist elite.

We are here because we are ready to rise in love for all of our people, and in rage for the structural nightmare of white supremacist capitalist patriarchy.

We are here for collective liberation, with the values of socialism rather then capitalism at the heart. And in this white working class leadership, organization, and a working class orientation to the work are all key to not only defeating Trump, but to all of us getting free.